There have been a lot of articles circulating around Steve Nash’s future after this season. Google “Steve Nash lakers” and you’ll see what I’m talking about. Lakers have several options on how to better handle his contract during the early parts of the season, but no course of action has been taken by the management yet.

Since medical retirement is out of the equation due to him playing more than 9 games, the Lakers need a stroke of luck for Nash to voluntarily retire. Although the 40-year-old veteran only logged 259 minutes this season this season, he told Grantland that he’s NOT going to retire just yet.

It’s just a reality. I’m not going to retire because I want the money. It’s honest. We want honest athletes, but at the same time, you’re going to have people out there saying ‘He’s so greedy. He’s made x amount of money and he has to take this last little bit.’ Yes, I do, have to take that last little bit. I’m sorry if that is frustrating to some but if they were in my shoes they would do exactly the same thing. I wouldn’t believe for a minute that they wouldn’t.

You can’t blame Nash for wanting to take the last little bit of dollar. The Lakers front office promised him $9.7 million more, and he has every right to that amount.

In the event that Nash magically pulls a “Katniss Everdeen” and “volunteer” to retire, Nash would not get his $9.7M [ref] We actually asked this to Eric Pincus to be sure.[/ref] but the Lakers can get close to $60 million dollars in cap space to spend on free agents in the next two years.

This is the most common and still available scenario that could happen to Nash, and even he himself is aware that he is a candidate for this. The concept of “Stretch Provision” has been all over his name in every write-up. In my own understanding, it releases a player and spreads out the contract deal over the course of X years[ref]Read: CBA rules: http://www.cbafaq.com/salarycap.htm.[/ref]. In his case, it’s 3 years.

I can bet my house that Nash is a sure shot HOF. But, if the Lakers choose this kind of parting, it wouldn’t be the happiest exit for a legendary point guard. Ending one’s career via stretch provision would hurt— ego, pride, career itself and possibly relationships. Excluding the emotions of each party, both Nash and the Lakers might[ref]I used the word “might” because if the Lakers want to execute a quick-and-dirty solution to their roster problem, then this might be it. [/ref] be happy with this setup financially.

If the Lakers’ plan is to go big on the 2015 free agency market, this option makes sense, as opposed to option 2. As Bresnahan points out, the Lakers will likely honor Nash’s $9.7 million next season for them to be fully flexible in the free agency markets of 2015 and 2016[ref]Some free agents available are: LeBron James, Kevin Love, LaMarcus Aldridge, Kyrie Irving, Anthony Davis, Andre Drummond, Roy Hibbert and Damian Lillard[/ref]. Maybe the FO’s thinking is that it’s better to have one or two seasons of suffering than a decade’s worth of pain and luxury tax bankruptcy. Plus, this would make Steve Nash a very happy man.

The Nash Equilibrium is named after its inventor John Nash. It is a game theory concept that is used in multiple disciplines ranging from criminology to economics, but as a fan of everything hipster[ref]OK, I’m kidding here.[/ref], I want to relate it to the NBA. According to its definition:

A system is in Nash equilibrium when different parties belonging to a system have no incentive to change strategies. If any party in the group changes strategy, the equilibrium is broken and results in a gain for one partner and a loss for another partner.

We stick to solid ground where the players are the Lakers organization and Steve Nash. To be in a Nash equilibrium, Lakers and Steve Nash must position themselves in a place wherein they would both benefit with the right proportion. The most optimal result for both parties will happen if the Lakers find ways to make Nash get what he wants without the Lakers giving up so many assets for the team.[ref]This includes not being burdened by the luxury tax.[/ref] 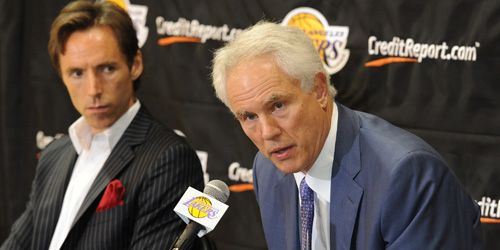 The process of getting “the right proportion” is a difficult GM task. However, once Mitch Kupchak gets all the factors sorted out and figures out the correct set of moves, we could say that a decent Nash-equilibrium-esque state is attainable. After all, it’s THE[ref]The Los Angeles Lakers franchise has a long and storied history, predating the formation of the NBA.Lakers hold the record of .615 W-L%, 60 playoff appearances and 16 championships. They are second in NBA championships only to the Boston Celtics. Their rosters have included some of the game’s greatest players, including George Mikan, Jim Pollard, Elgin Baylor, Jerry West, Wilt Chamberlain, Gail Goodrich, Kareem Abdul-Jabbar, James Worthy, Magic Johnson, Shaquille O’Neal, Kobe Bryant and Robert Sacre. JUST SAYIN’.[/ref] Lakers, we’re talking about here. (Flashback: Pau-Kwame, CP3…almost)

← TIL about wp_list_pluck
I miss being bad and being corrected →